5 photos
This 1949 Mercury Woody Wagon was photographed in 2011 at the Blackhawk Automotive Museum in Danville, Calif., in the East Bay of the San Francisco Bay Area.

“The Lincoln-Mercury Division was formed in 1945, but it wasn’t until the 1949 models appeared that Mercury was able to change (although only temporarily) its image as a glorified Ford,” according to a summary display next to the car. “It now shared more of its styling with Lincoln. It had wrap-around chrome front and rear bumpers, along with a new shiny ‘coil-style’ chrome grill.

“The ‘Woody Wagon’, as they were known, became a popular American vehicle, and to this day have become more and more sought after and valuable. The ‘Mercury Woody’ was always considered one of the most desirable to own.

“It had a three-speed manual transmission with Touch-O-Matic overdrive as an option. Other options included a radio, heater and whitewall tires.

“This beautiful Woody is unique in that it was period-modified. It’s flathead V-8 has three two-barrel Stromberg carburetors, Offenhauser heads and intake. Custom pain and period custom hubcaps were added as well. This 1949 Merc Woody is clearly one of the finest restored examples to be found.” 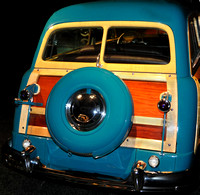