2 photos
This 1912 White is a Model GF, 60, 7-passenger touring car that was photographed at The Nethercutt Collection in Sylmar, Calif.

Because you cannot use flash or a tripod, and because I had little time, my settings were not optimal for this car, especially since I’ve upgraded my camera gear to professional. However, the photo provides a look into the past and one of the early automotive era’s rarest cars.

“Like many automobile manufacturers, White began in the business of making sewing machines,” according to a summary provided by Nethercutt. “Its first car was steam-powered and became a luxurious mode of travel. The White House used them for Presidents Theodore Roosevelt and William Taft.

“In 1910, gasoline engines took over and selling trucks augmented White’s line in the teens. The company deleted automobile production in favor of trucks during the 1920s.”

When new, this White would have cost $5,000 in that era’s valuation ~ a stiff price for many. White manufactured this beauty in Cleveland, Ohio. It featured a 489.4-cubic-inch L-head engine that could generate 60 hp. 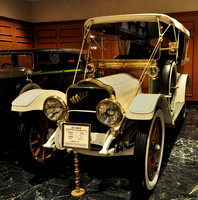