4 photos
"De Tomaso Modena SpA was an Italian car-manufacturing company. It was founded by the Argentine-born Alejandro de Tomaso (1928–2003) in Modena in 1959," according to Wikipedia. "De Tomaso's first road-going production model was the Vallelunga (named after the racing circuit) introduced in 1963..

The photos of this 1966 De Tomaso Vallelunga were taken at the 2014 Hillsborough Concours d'Elegance in the San Francisco Bay Area.

"This mid-engined sports car has a 104 bhp (78 kW) Ford Cortina engine, and reached a top speed of 215 km/h (134 mph). It had an aluminium backbone chassis, which was to become a common feature of De Tomaso cars. The first five cars were produced in aluminium while production cars had fibreglass bodywork.

"It originally produced various prototypes and racing cars, including a Formula One car for Frank Williams' team in 1970. The company went on to develop and produce both sports cars and luxury vehicles. From 1976 to 1993 De Tomaso owned legendary Italian sports car maker Maserati, and was responsible for producing cars including the Biturbo, the Kyalami, Quattroporte III, Karif, and the Chrysler TC. De Tomaso also owned motorcycle company Moto Guzzi from 1973 to 1993.

"De Tomaso went into liquidation in 2004, although production of new cars continued after this date. By 2008 a buyer was being sought for the De Tomaso factory and trademarks, as per the court-appointed liquidators. In 2009 Gian Mario Rossignolo bought the De Tomaso trademark and founded a new company named De Tomaso Automobili SpA. Rossignolo planned to assemble chassis and bodies in one of Delphi Automotive’s old production facilities in Livorno and to fit bodywork, paint and finish its cars in the former Pininfarina factory in Grugliasco.

"In May 2012, De Tomaso was again for sale after their business plan failed to gather sufficient financial backing. In July 2012, Rossignolo was arrested following allegations that he misused millions worth of government funds. In September 2012, speculation emerged that BMW might be interested in the brand factory to produce new BMW models. In 2014 the original workshop in Modena was in abandonment.

"In April 2015 an Italian bankruptcy court approved the sale of the company to China's Consolidated Ideal TeamVenture, for 1.05 million euros, or approximately $1.17 million USD. Per that sale report, 'A lawyer for the buyer announced that Ideal TeamVenture plans to produce cars in China bearing the De Tomaso name'." 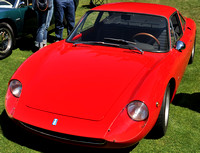