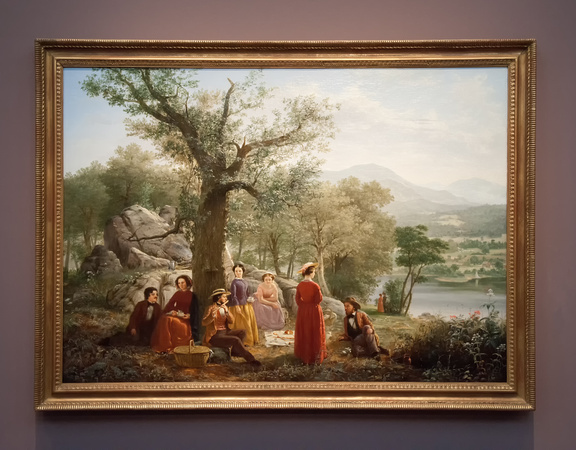 “The son of an itinerant portraitist, Thompson began his career as a sign painter and later became a successful portrait painter,” according to the de Young Museum in San Francisco.

“By 1850, Thompson primarily painted genre subjects such as this scene of a group of picnickers near Mount Mansfield, the highest peak in Vermont.

“In the mid-19th century, rapid industrialization, particularly in the Northeast, began to replace the agrarian lifestyle that had historically defined American life. Rural sightseeing, mountain hikes and pastoral picnics ~ or images of these activities ~ provided an idealized encounter with nature for city dwellers seeking a respite from the toil and troubles of city life.

“‘Recreation’ combines romantic landscape conceptions of the beautiful and picturesque, depicting nature and culture in harmonious balance. The central figure of the flute player evokes the romantic idea that human beings are inspired and sustained through a pastoral, even spiritual connection, with nature.”
© Glenn Thomas Franco Simmons' Photography
Powered by ZENFOLIO User Agreement
Cancel
Continue