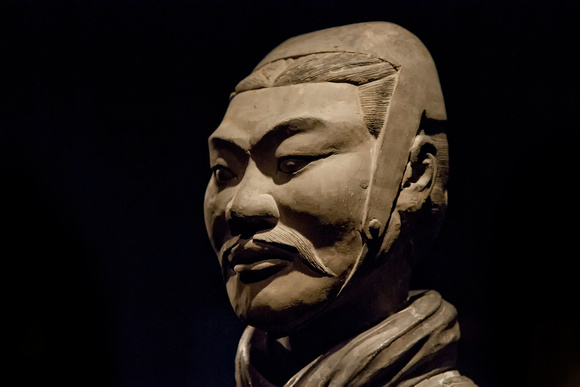 "The First Emperor, Qin Shihuang (259-210 BCE) conquered much in this life, but his driving purpose was even greater: He sought to conquer death," states the Asian Art Museum's review of the exhibit it hosted in 2013.

"In order to achieve immortality, he built himself a tomb ~ a vast underground city guarded by a life-size terracotta army including warriors, infantrymen, horses, chariots and all their attendant armor and weaponry.

"First unearthed in 1974, the underground burial complex of the First Emperor is a revelation for the ages, an astonishing discovery on par with Egypt’s mummies and elaborate tombs.

"Contemporary observers continue to be enthralled by his legacy, and it is through this ongoing interest that the First Emperor did indeed achieve immortality. This exhibition includes 10 figures ~ a representative sample of the actual army, which is estimated to include more than 7,000 life-sized figures and over 10,000 weapons."