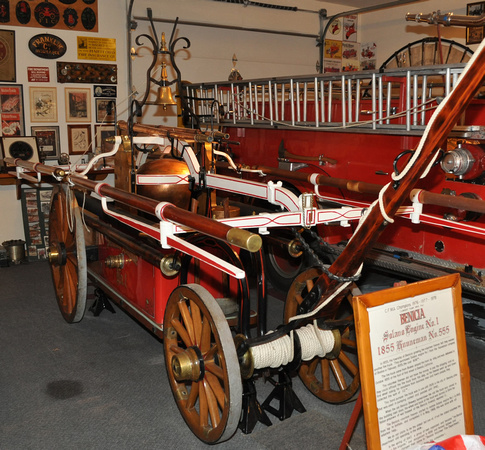 The first fire engine purchased by the Benicia volunteer firemen was an 1855 Hunneman hand-pumper that was branded Solano Engine No. 1. It was purchased for $608 and $113 for shipping in October of 1855.

"The shipping cost was still owed upon arrival, and the volunteer firemen did not have the entire amount," states the Benicia Fire Museum's Website. "After begging, borrowing, and pleading with local residents and businesses, they still fell short. If the balance was not paid before the delivery ship set sail, the fire engine would return still on board.

"It was decided to 'borrow' a horse that was posted in front of a local saloon and sell it back to the blacksmith on West Coolen alley, which raised enough to pay off the balance to get the engine off the ship. Fortunately, the horse belonged to the mayor, who was also a volunteer firefighter. When he found out about the transaction, he gave them 48 hours to get his horse back before he would have them hung for horse thieving."