4 photos
This Bentley 3 ½ liter Sedanca Coupe was photographed at the 2013 Hillsborough Concours d’Elegance in the San Francisco Bay Area.

Sedanca refers to “an automobile with an external or open-topped driver's position and an enclosed compartment for passengers,” according to Wikipedia. “Among other names for this body style are town car and Brougham.

“The Bentley 3½ Litre (later enlarged to 4¼ Litre) was presented to the public in September 1933, shortly after the death of Henry Royce,” according to Wikipedia, “and was the first new Bentley model following Rolls-Royce's acquisition of the Bentley brand in 1931.

“Bentley sold only the drivable bare rolling chassis with engine and gearbox, scuttle and radiator, ready for coachbuilders to construct on it a body to the buyer's requirements. Many distributors ordered their preferred bodies as showroom stock to enable them to stock finished cars ready for immediate sale.

“Bentleys of this era are known as Derby Bentleys because they were built in the Rolls-Royce factory located in Derby, England. Those of Bentley's previous independent era are Cricklewood Bentleys.

“Chassis series A to F were 3½ Litre cars; G to L (excluding I) were 4¼ Litres, and the M series was the 4¼ Litre Overdrive chassis.

"Each series consisted of 100 chassis numbers, either odd or even. The numbers 13 and 113 in each series were not used, to avoid upsetting superstitious customers.” 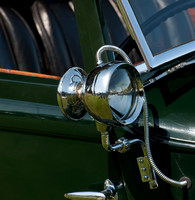