5 photos
With a bright multicolored design, the 1930 Ruxton at Blackhawk Automotive Museum in Danville, Calif., would be an eccentric automobile in any era, including the present one.

Under contract to New Era Motors, the five-passenger sedan that sports lavender on its hub caps was built by the Moon Motor Car Co. of St. Louis, Mo., and the Kissel Motor Car Co. of Hartford, Wis. ~ each part of America’s early and legendary automotive age.

“Josef Urban, a New York City theater set designer, created the body color scheme: eight colors were applied in overlapping horizontal bands that served to exaggerate the already low profile of the car,” states Blackhawk Automotive Museum, where I photographed this Ruxton in 2012.

“The front-wheel drive eliminated the central drive-shaft, providing a much-lower car than other cars of the period.

“A second multicolor combination was available with shades of brown, tan, orange and white; most Ruxtons were just painted black. The streamlined Woodlite headlamps were an accessory item and part of the overall design.”

Blackhawk said only 298 Ruxtons were built, and fewer than 20 are known to exist today.

The Nethercutt Museum’s tour of its multistory museum had a Ruxton in it when I toured it several times. The tour is free, but you must make an appointment in advance. The tour of the main museum is also free and an appointment is not needed.

Blackhawk has an admission fee or you can join and become a member. 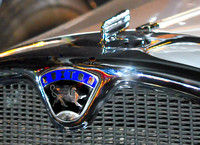