6 photos
This 1927 Rolls-Royce Phantom 1, four-door convertible was photographed at the 2012 Palo Alto Concours d’Elegance. The owner was very courteous and informative. He even opened up the Rolls-Royce’s doors to show us what was inside. I was so transfixed by his talk to us, that I neglected to take all the photos I should have; but, I do have some.

"Only the chassis and mechanical parts were produced by Rolls-Royce. The body was made and fitted by a coachbuilder selected by the owner. Coachbuilders who produced bodies for Phantom I cars included Barker, Park Ward, Thrupp & Maberly, Mulliner, Hooper and the Italian coachbuilder Zagato." 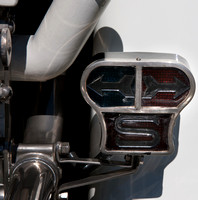