3 photos
This beautiful and rare car is a 1922 REO Model T6 7-passenger touring car that was photographed at The Nethercutt Collection in Sylmar, Calif.

The six-cylinder car features a 6-cylinder OHV engine capable of generating 50 h.p. When new, it cost $1,685.

“Ransom E. Olds was an entrepreneur who founded multiple companies in the automobile industry,” according to Wikipedia. “In 1897 Olds founded the Olds Motor Vehicle Company (later, as Oldsmobile, to become a part of General Motors).

Olds left the firm Oldsmobile in late 1904 for what he said were “certain reasons,” although a disagreement with stockholders is believed by many to have been a factor, according to Nethercutt.

He went on to establish a new company, which was going to be called the R.E. Olds Motor Car Co., but the owners of Olds’ previous company, the Olds Motor Works, objected and threatened a lawsuit because it said the names were too similar. As a result, it became the REO Motor Car Co. when he named it using the first initial of his first, middle and last names.

“Olds had 52 percent of the stock and the titles of president and general manager,” according to Wikipedia. “To ensure a reliable supply of parts, he organized a number of subsidiary firms like the National Coil Company, the Michigan Screw Co., and the Atlas Drop Forge Co."

Olds Motor Works began to call its vehicle line as Oldsmobile, which, along with Buick and Cadillac, became General Motors. 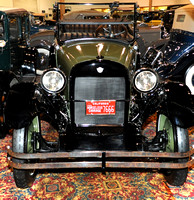