13 photos
I'll never forget the stories my Grandma Hill told me about, when the Imperial Japanese Navy attacked Pearl Harbor, and America, and my Grandma's only two sons, went to war.

It was a time of self-sacrifice, so much so, my Grandma and Grandpa moved to the Bay Area from Goleta so my Grandpa Hill could work at Mare Island.

He said that was the least he could do with two boys at war ~ one who took part in the major battles of the Pacific, and one who was wounded at Battle of The Bulge.

My Grandma told me of recycling, Victory Gardens, war bonds and more.

And it was during the tumultuous period after Pearl Harbor ~ with a nation still in shock but doing its duty ~ that the U.S. Office of Production Management shut down all new car and truck sales.

"Only the most-essential people were permitted to buy new ones," stated the owner of a 1942 Plymouth Special Deluxe (Blackout) edition that was featured at the 2012 Hillsborough Concours d'Elegance.

It was building a car on the "cheap."

"Cars built starting {in} January 1942 were not allowed to use any chromed parts other than bumpers, to conserve metal. For this reason, they were known as 'blackouts'. Each is different because they were assembled from available parts."

"This car was built in the Los Angeles Plymouth plant and it appears as it did when new, with chrome bumpers, but painted trim headlight bezels, hood ornament and an unpainted stainless steel front grille."

The owner said that, according to the National Plymouth Owners Car Club, "only 1,432 Plymouth blackout models were assembled in 1942."

"This example is one of only two Plymouth blackout convertibles known to exist today," the summary states. "The first owner was a civilian employee at The Presidio of San Francisco.

However, in the past few years, I remember reading an account or two, and also seeing a report on TV, about another 1942 Plymouth Blackout that was found during an estate or some type of sale in the Midwest. If a reader can provide information regarding this supposed discovery, please e-mail me.

As for blackout, my Grandma Hill told me of driving along the coast near dusk and having to drive without headlights on, due to the very real threat of attacks coming from Japanese submarines off the coast.

Thus, the name for the era when windows close to the coast were blacked out at night, when you couldn't drive with your headlights on at night, have camp fires at the beach, etc.

Plymouth was one of the marque cars of Chrysler and its successor, DaimlerChrysler.

Although there are differing accounts of the Plymouth logo, this 1942 Blackout has two logos: the Plymouth hood ornament and the Chysler badge.

The badge is said to feature a rear view of the Mayflower that landed, coincidentially at Plymouth Rock.

However, that is not where the Plymouth brand name originated. It came from Plymouth Binder Twine, which was chosen because of its name recognition among Americans ~ particularly farmers, ranchers, dairy ranchers, etc.

It should be noted that during the early years of Plymouth, more Americans lived in rural areas than in cities ~ the opposite of today. 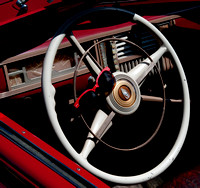 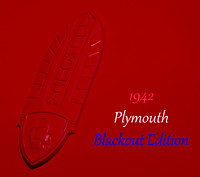