6 photos
This 1932 Rolls-Royce Phantom II Continental, Pillar-less Saloon was originally owned by the Prince of Nepal.

The strikingly beautiful body was built by Figoni & Falaschi of France.

"Living in London after he was deposed, the prince became enamored by the cars created by Figoni & Falaschi he had seen on a visit to Paris in 1936," states Blackhawk Automotive Museum's interpretive display.

At the time this photo was taken, the car was featured on the second floor at Danville, Calif.-based Blackhawk.

"Originally fitted with a four-door saloon body, he had Figoni & Falaschi create new coachwork," Blackhawk noted. "It was the largest car commissioned to them and the only Rolls-Royce to receive one of their unique creations.

"With this one-off creation, Figoni & Falaschi demonstrated how their sports car design concepts could be applied to a large luxury sedan. All vertical lines were changed to a 10-degree slope toward the rear, giving the body the impression of surging power and creating a visibly dynamic profile.

"A subsequent owner in the 1950s, Capt. Frederick Henry, was so enamored with this car that he traded his Bugatti Royale for it!

"Restoration of this masterpiece was begun in 1986, culminating in the RROC Chief Judges Award and the Lucius Beebe Trophy at Pebble Beach in 1992."

It features a 6-cylinder, inline, OHV 468.1-cubic-inch engine with a 4.25-inch bore and a 5.5-inch stroke and 120hp. Figoni & Falaschi Carrossiers were based in Boulogne-Seine, France. Rolls-Royce, the manufacturer, was based in Derby, England. 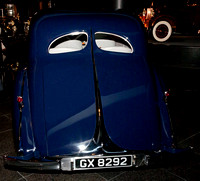 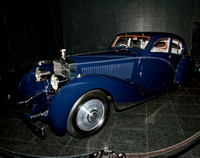