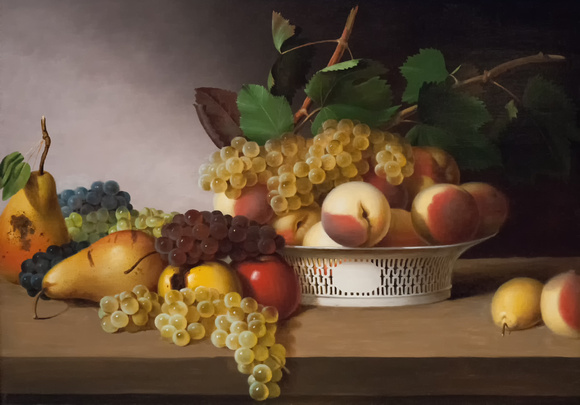 This painting by James Peale (1749-1831) is titled “Still Life with Fruit (ca. 1821) is an oil on wood panel classic that was photographed at the de Young Museum in San Francisco’s Golden Gate Park. It is part of the museum’s Trompe l’oeil (fool the eye) exhibit.

“Trompe l’oeil is a French term for paintings that attempt to trick the viewer into thinking that their subjects are real, rather than mere imitations of reality. Trompe l’oeil paintings thus render apparent a truth regarding all art ~ that it is an illusion,” according to the de Young Museum in San Francisco.

“Trompe l’oeil still-lifes date back to ancient times, when they adorned the walls of homes to symbolize their owners’ hospitality. During the Renaissance and Baroque periods in Europe, still-lifes often incorporated religious or moralizing content. Especially popular were vanitas subjects, which featured material possessions sumbolizing the transience of life and the folly of worldly vanity. However, during the 18th century Enlightenment, the evolution of the natural sciences ~ and scientific illustration ~ helped to establish still-lifes as an independent genre liberated from symbolic concerns.

“Early 19th century American still-lifes often evoked the sensory pleasures of fruit that was purely local and seasonal. These subjects were popular décor for living and dining rooms, where their real-life counterparts were served. In the mid-19th century, still-lifes celebrated the bounty and variety of the American landscape, including exotic flowers, fruit and fauna more widely available due to expanded transportation networks.

“By the late 19th century, many artists shifted their focus from nature to the manmade, suffusing still-lifes with an undertone of nostalgia for outdated lifestyles and objects that had been supplanted by modernity.”
© Glenn Thomas Franco Simmons' Photography
Powered by ZENFOLIO User Agreement
Cancel
Continue