5 photos
Dietrich-made bodies, which included this 1934 convertible sedan beauty on what I believe is a 147-inch-long wheelbase, were a big hit.

Packard hoped the 1934 models would give it a boost since the year marked a deepening, for most Americans, of what would later be known as The Great Depression.

The 1934 Dietrich Packard 1108 Convertible Sedan was not a disappointment.

Even President Roosevelt owned a Packard, which illustrates the fabled brand's popularity that was earned through beautiful designs and solid performance.

In fact, the Eleventh Series Packards, as they are official known, were among the best Packards ever produced by Detroit-based Packard Motor Car Co. and later by South Bend-based Studebaker-Packard Corp. of South Bend.

Packards were produced from 1899 to 1958, and I can still remember my late Mother's admiration for them.

The bodies are named for Ray Dietrich who was a Packard designer from 1925 to 1933, when he left to take a position with Chrysler.

Although gone, Dietrich was not forgotten at Packard because the ingenious designer left behind a treasure-trove of superb designs. In 1934, Packard produced six Dietrich-designed models on the 147-inch-long chassis: Convertible, Convertible Sedan, Coupe, Sport Phaeton, Sport Sedan and Victoria.

The 1108's v-framed window and gracefully extended hood made the convertible sedan one of 1934's best designed ~ one that grows in value and popularity every year.

Packard's 1108 Dietrich also sported stately skirted fenders. It also featured what some consider "suicide doors" ~ front and rear doors that open inward and are attached centrally to the body noted for its glistening chrome.

The 1934 Packards also included an option to have a factory-radio installed.

At the time this photo was taken, this classy Packard was owned by a San Francisco Bay Area couple. 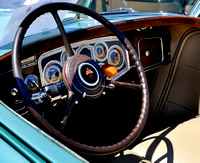 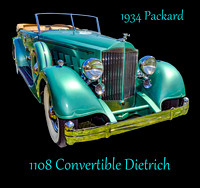