This car’s owners pointed out in a vehicle summary that it is commonly referred to as a “tulip” body, “not because I’m made up of tulip wood, but because of the tulip like swoop-de-doop shape of {the} body and doors.”

It was shipped from the Clarke Street Cadillac factory in Detroit, Mich., in April of 1907 tp the Alvan T Fuller Cadillac/Packard Dealership in Boston, Mass. As an aside, Fuller was elected Massachusetts governor for two terms beginning in 1924.

The owners, at the time I photographed this beauty, had a car summary in the form of a narrative, with the car speaking in the first person:

“I was subsequently sold to Arthur Darling, a jeweler, in Rockland, Mass. Dear Arthur loved me so much, that many years later, when he should no longer drive me, he had me disassembled and stored in his Rockland basement.

“I was asleep in Arthur’s basement for many years after that, and I have little memory of those years. Sometime, around 1945, old Earl Wyatt of Rockland found my wheels and axles in an orchard under an apple tree ~ I have no idea whatsoever of how or when I got out of Arthur’s basement. Earl became curious. He rooted around the apple farm a bit, and he eventually found most of my pieces. I had been taken apart, years before, and made into a saw to be used to cut up old apple trees that were no longer producing fruit. That was a really sad state of affairs. …

“Anyways, good old Earl put me together and got me back on the road in ’47, and drove me hell-bent-for-crazy around Rockland until I just plain wore out!

“In 1978, old Earl sold me (as a basket case) to Franklyn Brown of Holbrook, Mass., who restored me to what I am today. He restored me to original, including authentic colors, and genuine Cadillac (Eldo burgundy) leather. Franklyn was getting long in the tooth himself, and sold me in 1986, after which I passed through several owners, until my buddy Fred found me in a hot metal shop in Arizona, rescued me and brought me to California in 2003.

“I have a single-cylinder engine, 5-inch bore, and 5-inch stroke, and displace 98.2 cubic inches, producing 10 hp. I have a 2-speed planetary transmission and a reverse gear as well. High gear is a direct drive, so I really put-put along! My top speed, wide open, downhill, with a tail wind is about 30 to 35 mph.

“So there, you have my life story, up to know ~ with some gaps to be sure, but I am a survivor and plan to stay with my current loving custodians, Fred and Penny Bausch for years to come.” 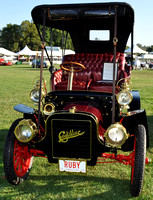 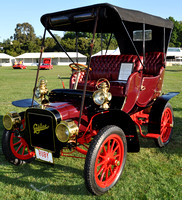