4 photos
This 1912 Ford Model T delivery truck is owned by Bill and Kaaren Brommer (at the time this photo was taken). I had the pleasure to take photos of their car at the 2010 Palo Alto Concours d’Elegance in the San Francisco Bay Area.

The narrative they provided on a display next to the delivery truck was interesting and educational. You could tell by reading it that they really loved this Model T.

“William Brommer is the proud son and grandson of professional bakers,” the narrative noted. “While Bill didn’t follow in their steps to work at King’s Bakery, he did bring history home.

“‘The story goes that we used to be in the restoration business and the customers’ cars always came first,” Kaaren explained. “When we retired the business, we decided to build a car.’

“As DIY enthusiasts know, it’s never that simple,” the narrative continued. “Bill and Kaaren chose a 1912 Model T Ford delivery truck that they would build from a blueprint.”
The couple were so thorough that they requested that blueprint from the Ford Motor Co. archives. Ford sent them a 4x6-inch photo, which they had to have professionally enlarged.

The blueprint filled the Brommer living room and enabled the couple to take measurements of the chassis and wheels, so they could build the body.

“While most antique car restorations start with original parts, the Brommer truck started from scratch and was a labor-intensive process,” the narrative stated. “They cut 300-400 maple wood pieces and assembled the truck like a giant puzzle. They hand-cut the pieces for the floor, doors, roof and frame, bolting the wood to the frame.

“The wood roof was incredibly complex because each piece of wood had to be cut, steamed, drilled, mounted and spaced.”

They then disassembled, hand-sanded and applied a finish, which they coated with sealer.

“Thirty-five strips of maple make up the roof, which is topped by a vinyl fabric,” according to the narrative. “The Brommers painted their truck bright red and decided to honor Bill’s family business. A local artist hand-painted the logo and wording designed by the Brommers and when driving the truck, Bill dresses as a baker.

“It took a couple of years for Bill and Kaaren, with help from their son Michael, to finish the project, but they found it’s a wonderful educational opportunity for children who would otherwise never get a chance to see this type of car.”
The narrative was written by Kelly Azevedo.

I didn't edit the photos I took in 2010 until September 2016. Reading the Brommers' story, I wish I would have taken dozens more photos and talked to them.

I also would have asked them about the family's history in the baking business, what Bill did professionally, the cost of the entire project, and what they are doing now.

At least I did get a few photos.

The Brommers' attention to detail and the craftsmanship that went into building this very rare truck are testimony to not only their financial investment, but to their dedication to Bill's family's legacy.

In building this vintage truck, they have allowed countless people to view a bit of history that they otherwise would not have ever seen ~ except, perhaps, in a book or a photo. 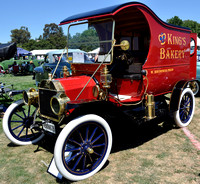