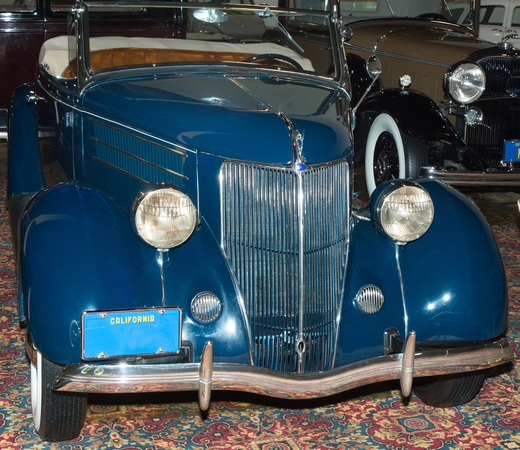 This 1936 Ford Model 68 Deluxe Roadster and coach were manufactured by the Ford Motor Co. of Detroit, Mich. At one time, many automakers did not make the coaches. It sports an 8-cylinder L-head engine that could sustain 85 hp. When new, it cost $560 in the dollar valuation of that year. It was photographed at The Nethercutt Collection in Sylmar, Calif. Nethercutt said that as Ford's less-expensive car, it was Ford's most beautiful.


"The V-8 motor could outrun most cars of the era," according to Nethercutt. "The infamous Clyde Barrow wrote Henry Ford praising the performance of the V-8 Ford."
© Glenn Thomas Franco Simmons' Photography
Powered by ZENFOLIO User Agreement
Cancel
Continue