3 photos
This 1960 Austin Mini Cooper was photographed at the 2013 Hillsborough Concours d’Elegance in the San Francisco Bay Area.

“The Mini, a small economy car in production from 1959-2000, is a British icon of the 1960s,” according to an owner’s display summary at the concours. “Its innovative space-saving front-wheel drive layout, which allows 80 percent of the car’s floor pan to be used for passengers and luggage.”

This Austin influenced other car makers.

“Its name has become a universal prefix of the English language,” the summary notes. “In 1999, the Mini was voted the second most influential car of the 20th century, behind the Ford Model T.

“It was badged with BMC’s two main brand names, Austin and Morris, until 1969 when it became a marquee in its own right. Its introduction was inspired by petrol rationing instituted in the 1956 Suez Crisis. 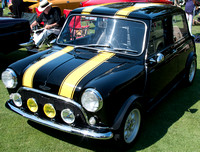