"The MG T series is a range of body-on-frame convertible sports cars that were produced by MG from 1936 to 1955," according to Wikipedia. "The series included the MG TA, MG TB, MG TC, MG TD, and MG TF Midget models. The last of these models, the TF, was replaced by the MGA. The TF name was reinstated in 2002 on the mid-engined MG TF sports car.

"The TC Midget was the first postwar MG, launched in 1945. It was quite similar to the pre-war TB, sharing the same 1,250 cc (76 cu in) pushrod-OHV engine with a slightly higher compression ratio of 7.4:1 giving 54.5 bhp (40.6 kW) at 5200 rpm. The makers also provided several alternative stages of tuning for 'specific purposes'.

"It was exported to the United States, even though only ever built in right-hand drive. The export version had slightly smaller U.S. specification sealed-beam headlights and larger twin rear lights, as well as turn signals and chrome-plated front and rear bumpers.

"The body was approximately 4 inches (100 mm) wider than the TB measured at the rear of the doors to give more cockpit space. The overall car width remained the same resulting in narrower running boards with two tread strips as opposed to the previous three. The tachometer was directly in front of the driver, while the speedometer was on the other side of the dash in front of the passenger. 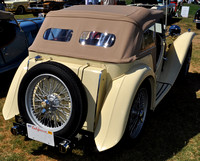 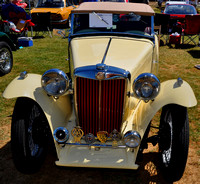