2 photos
“Mercury introduced its first post-war model in April of 1948 as a 1949 model,” according to this 1950 Mercury Sport Sedan's summary at the 2010 Palo Alto Concours d'Elegance.

“The design was based on the customizing popular in California. Ironically, the 49-51 Mercury itself became a favorite of these same customizers. Today, it is almost impossible to find a coupe that hasn’t been customized. Details like the waterfall dash were classic art deco.”

The sedan is powered by a 255-cubic-inch flathead V-8 engine that can generate 10 hp.

“The heavy car was never a fast vehicle,” the summary states. “However, when coupled with the overdrive transmission, the car will cruise effortless at freeway speeds and achieve 20-plus mpg. With aerodynamic styling, the legendary smoothness of the flathead engine and with seats as big as couches, it makes for a very quiet and comfortable ride.”

The owners of this vehicle provided a lengthy narrative about its history.

“This car was sold new in Watseka, Illinois, to a little old lady who drove it to church and the grocery store (it’s true!),” according to the summary. “In 1960, she traded it in on a new Mercury at the dealership run by the father of the current owner. At that time, it had only 10,000 miles on it. Much to the dismay of the sales force, the car went to the dealer’s 17-year-old son for $125. He has owned it ever since.

“Driving it to D.C., Atlanta, Miami and New Orleans, he added 56,000 miles to the odometer. After graduating from college, it was retired in favor of a new Mustang convertible. It sat in various garages and barns and gradually deteriorated. Meanwhile, the current owner was collecting ‘new old stock’ parts for a restoration. In July of 1986, the restoration was begun.

“Unfortunately, the first restorer fell victim to a personal crisis and the second one got intimidated by the project. After a decade of false starts, a third restorer started the project. He got the car back together and it won a people’s choice award in 1997 at a local car show in Illinois.

“The car was then shipped to the current owner in California. At that point, the paint greatly surpassed the chrome and the motor compartment was deteriorating. The current owner removed the chrome and had it re-plated. He then disassembled everything in the engine compartment, removed all the paint and rust, and repainted it. He also removed and re-plated every fastener to achieve a true nut-and-bolt restoration.

“After a great deal of research, the proper location of every fastener was determined and the car was put back together. This research was complicated by the fact that virtually all of this era’s Mercurys have been customized. Thus, finding an unmolested original to use as a pattern was very difficult. Only one was found in Pleasanton.

At 1 p.m. on May 9, 2009, the hood was at last bolted on and the car was driving to the May Madness shows in San Rafael. This was the first time in over a decade that the engine had run. It not only made it there but won best of show. Since then, it has won best engine at the San Anselmo show.” 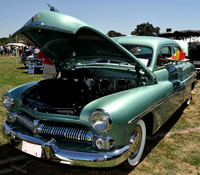