2 photos
This 1938 Ford pickup was first used as a county utility truck in the Portland, Ore., area. It was photographed t the 2010 Palo Alto Concours d’Elegance in the San Francisco Bay Area.

“In 1941, it was traded to a Ford dealer and passed through many owners until 1972 when it was restored with nitrocellulose lacquer to its present condition with a stock 59 AB flathead Ford V-8 by classic car restorer Stan Dietz of Oregon City, Ore., for his personal use,” according to a 2010 owner’s summary. “In 1975, it was purchased by Don Williams, the current owner and director of the Blackhawk Collection {Blackhawk Automotive Museum} in Danville, Calif.

“Soon after, it was sold to the late actor, Steve McQueen, who owned and drove it for several years and registered it with historical vehicle plates in 1978. The truck was acquired from Steve McQueen by early Ford V-8 collector Tal Denny in the late 1970s.”

The current owner, at the time this photo was taken, purchased it from Denny and has maintained the truck in its present condition. 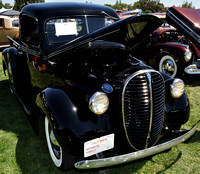 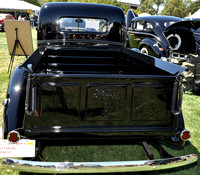