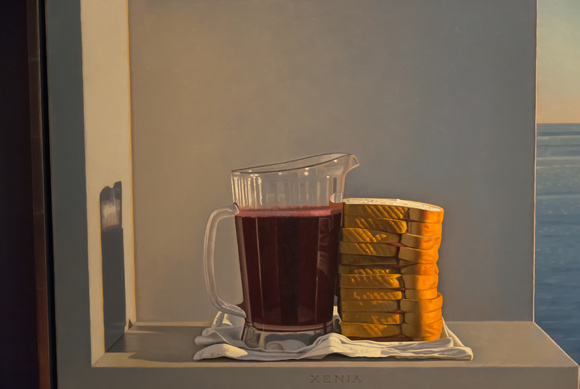 "Still Life with Grape Juice and Sandwiches (Xenia)" was an oil-on-canvas painting by David Ligare in 1994.

"David Ligare's classically inspired still-lifes demonstrate his belief that art can reflect 'not just aesthetic but moral or ethical decisions,'" according to a de Young Museum summary.

"Ligare has volunteered at a homeless shelter in his hometown of Salinas, Calif., where he served grape juice and sandwiches like those depicted here ~ an act he views as a conceptual component of this work.

"Xenia in the painting refers title refers to the ancient Greek concept of hospitality, which included the practice of providing guests and strangers with baskets of food.

"According to Ligare, 'the picture is truly complete if it inspires others to enjoy the privilege of serving 'strangers' among us who are in such need.'

"The presence of this contemporary work in a gallery of predominantly 19th-century trompe l'oeil paintings points to the persistent resonance of the still-life genre, which can reflect both an artist's mastery of technique and the philosophical, spiritual or moral questions of an age."
© Glenn Thomas Franco Simmons' Photography
Powered by ZENFOLIO User Agreement
Cancel
Continue