"The car was a radical new design by Dante Giacosa, who had been playing with ideas of placing the drivetrain into a compact package at either the front or rear of the vehicle for years. Fiat executives said no to his front wheel drive proposal, but gave the rear-engine rear-wheel drive Fiat 600 a thumbs-up. This car was huge on the inside and small on the outside; just what the average Italian needed in the day and still gets from Fiat today.

“Excellent gas mileage was also part of the design, to get 40mpg in town and 60 on the highway was easy; but, don’t expect to go faster than 65 mph wide open with a tail wind, and about 35 mph or less going up hills.”

“This is an example of a Ghia-modified car,” the summary notes. “It retains most of the original Fiat steel body. After Ghia cut the roof off and removed the doors, it strengthened and shaped the body with tubing and sheet metal.”

Ghia did not keep records of the Ghia-modified Jolly, so the exact number manufactured is unknown.

“This car is a USA version, so we know it is one of the group of cars ordered by the Fiat importer in 1959, Roosevelt Motors,” the summary states.

Ghia marketed the car for the beach, hunting and golf, as well as one for your yacht, if you had one! The Jolly cost twice as much as the stock Fiat sedan.

“It is estimated that about 100 remain today,” according to the summary. “The wicker seats and the folding top with either tassels or dingle berries make a great touch to a very impractical car purchased mostly by the rich originally, and today.

“This car seems to have been sold in Los Gatos or San Francisco. It was found dead by its second and present owner in 1971, parked in the backyard of a home in Los Gatos.”

The car’s owner, at the time this photo was taken, used to drive by the yard on his minibike. He purchased it for $20. By the time he was 16, the car was running and driving for about a $100 investment, plus tires.

“The car was driven all over California, then sold in 1976 to its third owner who promptly blew up the engine trying to see how fast it would go downhill.

“After a long rest, it was repurchased, made to run again, and then sold again to its fifth owner who drove it as a beater until he parked it because of illness. The second owner then bought it back again in 1982, and it sat in a field until 2008 when the value of the Fiat 600 Jolly became high enough to justify restoration of this car.” 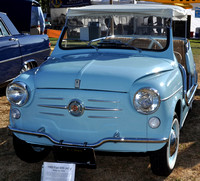