6 photos
This classic 1952 Jaguar XK120M “was launched in roadster form at the 1948 London Motor Show as a test bed and show car for the new Jaguar XK engine,” according to the owner’s car summary at the 2011 Hillsborough Concours d’Elegance.

“It caused a sensation, which persuaded Jaguar founder and design boss William Lyons to put it into production,” the summary states. “With an alloy cylinder head and twin side draft SU carburetors, the dual overhead-cam 3.4-liter straight-6 XK engine was an advanced mass-produced unit of its era.”

At its most powerful, it would reach 160 bhp.

“The ‘120’ referred to its 120 mph top speed,” the summary notes, “which made it the world’s fastest standard-production car at its launch. A complete frame-off restoration was completed in 2011.

“The car is configured for Type C racing-correct features, such as a louvered hood, wine Dunlop alloy wheels, a metal tonneau, racing suspension, large diameter exhaust and sand-cast carburetors ~ all aimed at using 1952 technology to achieve better than stock performance.” 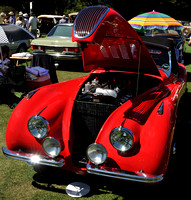 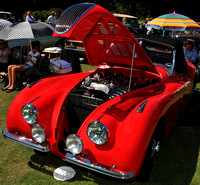 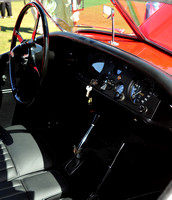 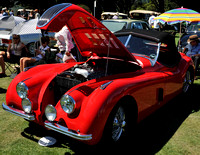