"Isotta Fraschini is an Italian motors brand historically known for the production of cars as well as trucks, and engines for marine and aviation use," according to Wikipedia.

"Founded in Milan, Italy, in 1900 by Cesare Isotta and the brothers Vincenzo, Antonio and Oreste Fraschini, in 1955 it was merged with engine manufacturer Breda Motori and was renamed F.A. Isotta Fraschini e Motori Breda.

The Tipo 8 was introduced in 1919 and had the first straight-8 engine that was put into series production.

"The Tipo 8 also introduced a new philosophy for the company: one model only, with the emphasis on luxury," stated a Blackhawk summary about the car.

"Isotta Fraschini was known for grandeur. The rich and famous in Europe and America were among the marquee's most enthusiastic customers.

"The rolling chassis (engine, radiator, wheels, instruments, steering wheel, etc.) alone cost $9,750. The cost of design and custom coachwork was added to that.

"Nearly a third of the Classic Era Isottas were imported to the United States. This Landaulet, designed and built by Carrozzeria Castagna of Milan, is one of the only three known to exist.

"Between 1920 and 1930, Carlos Castagna Carrozzeria designs could be found on every expensive chassis built; Castagna was the only Italian coachbuilder privileged to create coachwork on a Duesenberg chassis ~ one of the most 'high society' vehicles of its day." 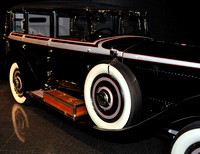