5 photos
This 1936 Hupmobile is an excellent illustration of what was great about the Automotive Golden Age of the 1920s and 1930s. Made by Hupp Motor Car Corp. of Detroit, Mich., this vehicle is an example of The Six Series 618G, six-passenger, four-door sedan.

I think the dark tone on the car is a dark brown, although with the light at The Nethercutt Collection, where it was photographed in Sylmar, Calif., made it difficult to capture precisely capture it.

This Hupmobile boasts a 245.3-cubic-inch L-head six-cylinder engine. Maximum horsepower was 101. When new, this Hupmobile cost $795 in 1936 dollars. Hayes Body Corp. of Grand Rapids, Mich., was the coachbuilder.

“Hupmobile began production in 1909 with a two passenger runabout that sold more than 1,500 cars that year,” according to The Nethercutt Collection’s vehicle summary. Hupp’s phenomenal early success was due to good, solid engineering and affordability. 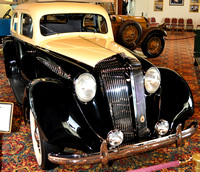 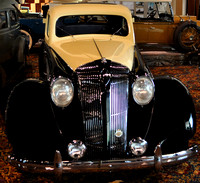 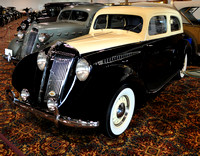 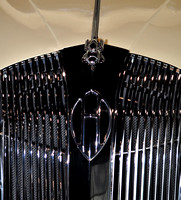