4 photos
It was a time of inestimable horror and suffering; a short epoch in the world's history when an entire group of people were subjected to the most reprehensible treatment seen in the Modern Era. It was also a time of great theft, of one group of self-proclaimed supermen stealing everything they could from a much-maligned and innocent religious minority whose sole "crime" was being born a Jew, a Gypsy or one of many other minorities persecuted by the 1,000-year Reich.

The ill-gotten wealth derived from the wholesale theft of Jews and others allowed the Nazis to live what many considered a privileged lifestyle. Those riches were enjoyed by many in the Reich, but most particularly by its new ruling class, which included a host of drug-fueled madmen along with their leader, Adolf Hitler. One person who benefited from the Reich's stolen riches was war criminal Joachim Von Ribbentrop, the German ambassador to England.

This 1932 Horch V-12 Type 670 Sport Cabriolet was custom-built for Von Ribbentrop. The United Kingdom commandeered the car following the outbreak of World War II. Only 73 V-12 Horch autos were produced in little more than two years before the model was discontinued. Of the originals, only three are known to remain, including this one. It sports a V-12, 367.9-cubic-inch L-head engine with a 3.149-inch bore and 3.937-inch stroke. At 3000 rpm, it could reach 120 hp. The body was built by Glaser Karosserie of Dresden, Germany. Horchwerke A.G. was the manufacturer. When new, it cost $10,045 in U.S. dollar valuation at the time.

"Ribbentrop was a defendant at The Nuremberg Trials," according to Wikipedia. "The Allies' International Military Tribunal convicted him on four counts: crimes against peace, deliberately planning a war of aggression, war crimes, and crimes against humanity.

"According to the judgment, Ribbentrop was actively involved in planning the invasions of Austria, Czechoslovakia, and Poland. He was also deeply involved in The Final Solution; as early as 1942 he had ordered German diplomats in Axis countries to hasten the process of sending Jews to death camps in the east.

"He supported the lynching of Allied airmen shot down over Germany, and helped to cover up the 1945 murder of Major-General Gustave Mesny, a French officer being held as a prisoner of war. He was held directly responsible for atrocities that took place in Denmark and Vichy, France, since the top officials in those two occupied countries reported to him.

"Ribbentrop claimed that Hitler made all of the important decisions, and that he had been deceived by Hitler's repeated claims that he only wanted peace. The Tribunal rejected this argument, saying that given how closely involved Ribbentrop was with the execution of the war, he could not have remained unaware of the genocidal nature of Hitler's actions.

"Even in prison, Ribbentrop remained loyal to Hitler: 'Even with all I know, if in this cell Hitler should come to me and say 'Do this!', I would still do it.'"

"The Horch was a celebrated German marquee whose saga goes back to the earliest days of motorcar production," according to Blackhawk. "Founder August Horch had worked with Karl Benz in Mannheim before a disagreement prompted him to form his own company in 1899.

"In 1909, Horch had a falling out with his board of directors and departed to start yet another company, Audi. Meanwhile, Paul Daimler left Daimler-Motoren-Gesellschaft in Stuttgart and joined Horch in 1923.

"Under Paul Daimler's direction, Horch moved into the prestige ranks of Mercedes and Maybach. In 1932, Horch merged with DKW, Wanderer, and Audi to form Auto Union." 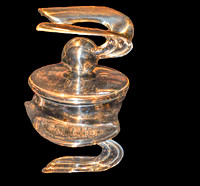