"In 1924, the Tulipwood Torpedo was commissioned by André Dubonnet who, at the age of 26, was an accomplished and well-known aviator and driver," according to Blackhawk.

"The Dubonnet family had amassed a fortune from the aperitifs and cognacs that continue to bear the family name.

"Dubonnet contracted the Nieuport Aviation Co. to build a lightweight body suitable for both racing and touring.

"Nieuport craftsmen formed a frame of wooden ribs measuring up to 3/4-inch thick that were covered with 1/8-inch wooden veneer.

"Strips of tulipwood of uneven thickness and length were fastened to the veneer with thousands of brass rivets.

"The body was then sealed, sanded and varnished. When fully equipped, the body was to have eight approximately 160 pounds.

"In 1924, Dubonnet entered the Hispano-Suiza in the Sicilian Targa Florio and he finished sixth."

Blackhawk said he finished fifth in the Coppa Florio and first in the over 4.5-liter class.

It was built by Nieuport Aviation Co. of Bois-Colombes, France. It was manufactured in Sté. Française, France. 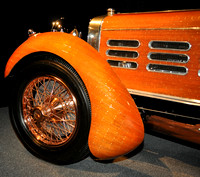