13 photos
This 1956 Austin-Healey was photographed at the 2011 Hillsborough Concours d’Elegance.

“Donald Healey’s collaboration with Austin produced the 100-4, a 4-cylinder car capable of doing 100 mph,” according to the summary provided by the car’s owner.

“An M-version (for Le Mans) was introduced in 1956 with a louvered bonnet and leather straps. It has twin SU H6 carburetors, a cold air box to increase air flow, a high-lift camshaft and 8.1:1 compression pistons, producing 110bhp at 4500 rpm.
“About 100 of the 640 factory-built models remain. Another 500 conversion kits were supplied to owners and dealers.

“This example, known as “Lola,” is a British Motor Industry Heritage Trust-certified factory-built model. It has been modified to accept spin-on oil filter cartridges and has a period-correct finned alloy valve cover.

“The car was a daily driver until 1973 when the #1 rod bearing broke. It remained partially dissembled for 27 years in a Palo Alto garage, when an after-dinner conversation led the current owner to the car. A full restoration was done in 2009-10.”

The Healey won Best of Class at the British Motorcar Show in Woodland, Calif. 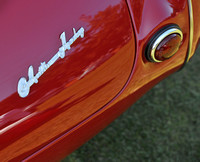