12 photos
This 1911 Rolls-Royce Model 40/50 Silver Ghost Tourer is a rare automobile preserved from the dawning of the automobile era.

"The Rolls-Royce Silver Ghost name refers both to a car model and one specific car from that series," according to Wikipedia. "Originally named the 40/50 h.p., the chassis was first made at Royce's Manchester works, with production moving to Derby in July 1908, and also, between 1921 and 1926, in Springfield, Mass.

"Chassis no. 60551, registered AX 201, was the car that was originally given the name Silver Ghost. Other 40/50 hp cars were also given names, but the Silver Ghost title was taken up by the press, and soon all 40/50s were called by the name, a fact not officially recognized by Rolls-Royce until 1925, when the Phantom range was launched.

"The Silver Ghost was the origin of Rolls-Royce's claim of making the Best car in the world ~ a phrase coined not by themselves, but by the prestigious publication Autocar in 1907."

Rolls-Royce was founded in 1904 by Charles Stewart Rolls and Frederick Henry Royce.

The Derby-England based automaker was a renowned British-owned automaker for decades, and its marquee still inspires car enthusiasts of all ages.

“Royce was a respected engineer and manufacturer who had developed an interest in motor cars as an efficient means of transportation,” notes Danville, Calif.-based Blackhawk Automotive Museum, where this photo was taken. Rolls was a pioneer motorist whose firm of C.S. Rolls and Company sold quality French motor cars.”

It was at the London Motor Show in November 1906 that the Silver Ghost was first introduced, with production continued until the spring of 1925 at Derby.

The Silver Ghost was also produced in the United States at a manufacturing facility in Springfield, Mass.

At the time this photo was taken in 2010, Blackhawk itself owned a 1923 Springfield-manufactured Rolls-Royce Tourer, which I have photos of and will hopefully post in the future.

“The Rolls-Royce radiator mascot, The Spirit of Ecstasy, was designed by illustrator/sculptor Charles Sykes and debuted in 1911,” Blackhawk stated. “The Rolls-Royce grille shape and the mascot are covered by Britain's Protection of Monuments Act.” 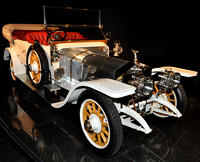 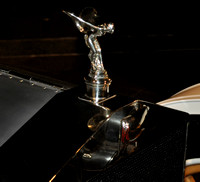 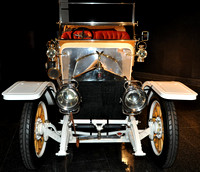