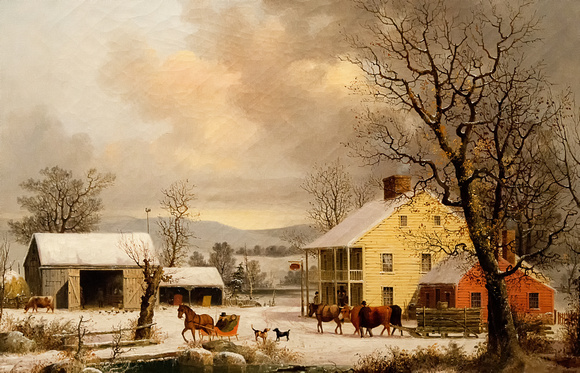 Winter in the Country (lighter version)

"{The painting} evokes the New England landscape near his New Haven, Conn., home," according to a summary provided by the de Young Museum in San Francisco, where this photo was taken. "The structure at right is a colonial-era saltbox house, characterized by a roof that is steeply pitched in the front but descends gradually toward the back. Durrie's image documents the economic progress of the original settlers, who initially built a single-story home but later added a three-story hotel to capitalize on the needs of travelers and tourists.

"Painted just prior to The Civil War, this productive and prosperous scene celebrates the virtues of Northern free labor, which was often contrasted with the inequalities of Southern slave labor. Durrie's paintings were popularized by the firm of Currier & Ives, who published 10 prints – mostly of his winter scenes – between 1861-1867. These idealized depictions of New England farms resonated with Northerners nostalgic for the rural lifestyle being transformed by industrialization."
© Glenn Thomas Franco Simmons' Photography
Powered by ZENFOLIO User Agreement
Cancel
Continue