3 photos
This four-door 1948 Chevrolet Fleetmaster was photographed at a Bombers United Car Show in Silicon Valley.

"The Chevrolet Fleetmaster is an automobile which was produced by Chevrolet in the United States for the 1946, 1947 and 1948 model years," according to Wikipedia. "The Fleetmaster series included the Fleetline sub-series which was offered only in 2-door and 4-door fastback body styles.

"The Series DK Fleetmaster was introduced as the top trim-level model in the 1946 Chevrolet range, along with the lower level Series DJ Chevrolet Stylemaster. The Fleetmaster, which replaced the prewar Chevrolet Special Deluxe, was powered by a 216.5 cu in (3.5 L) straight-six engine driving through a 3-speed manual transmission. It was offered in 2-door Town Sedan, 4-door Sport Sedan, 2-door Sports Coupe, 2-door Convertible and 4-door Station Wagon models. A Fleetline sub-series was available as the 2-door Aero Sedan and 4-door Sport Master Sedan, both of which featured fastback styling and additional triple moldings on all fenders."

This car's owner is a member of the Viejitos Car Club of San Joaquin Valley.

On Sept. 16, 1985, the Viejitos Car Club was founded in Lynwood, Calif. Sept. 16 is also the day that Mexico celebrates its independence day. With many California residents who are of Mexican descent, the day bears special significance.

It's the kind of thing that makes the tapestry of cultures a very special trait of California. My first introduction to Viejitos members was at the Bombers United Car Show at History San Jose in Silicon Valley. My wife and I had a great time. There was plenty of excellent food and the cars were outstanding.

The Viejitos Car Club was founded by "Crazy" George Luna and Albert "Lobo" Rivera. Lowrider.com has an excellent feature from 2010 about the club. I encourage you to read it.

Although I don't speak Spanish, I looked up viejitos, and the translation said roughly translates to "little old man", "old-timer", "grandfather", "old chap", "old geezer", "old stager." Some of those definitions apply to me. Anyway, check out that Lowrider.com article, and there are plenty of Viejitos Car Club chapters on Facebook to check out. 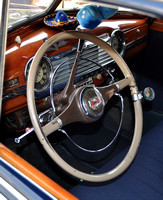