3 photos
This 1919 Pierce-Arrow Model 66-A-4 touring convertible once was owned by Roscoe Conkling Arbuckle.

Known popularly as “Fatty Arbuckle,” the legendary movie star had the Pierce-Arrow personalized in numerous ways, including a badge with the initials “RCA” for Roscoe Conkling Arbuckle.

He also had a radiator cap designed with the letter “A” with an arrow through it.

“The roly-poly Vaudevillian and early motion-picture star … wanted a car to complement his personal stature,” according to Blackhawk Automotive Museum in Danville, Calif.

The car was not featured the last time I visited in September 2012, and I’ve asked if it has been sold but have not yet received an official confirmation.

“The coachwork was a very early design by Harley J. Earl for Don Lee Coach and Body Works in Los Angeles,” Blackhawk states. “Earl would eventually have a stellar design career with General Motors.

“The chassis has a 147.5-inch wheelbase and the 38-inch tires are mounted on 24-inch ‘artillery-type’ wheels. The gas tank has a 32-gallon capacity because the car seldom got more than four miles per gallon.”

The manufacturer, Pierce-Arrow Motor Car Co. of Buffalo, N.Y., sold the car chassis for approximately $6,000. Arbuckle then paid Don Lee another $25,000 for the coach work, which reportedly included a wet bar; however, that information is from several rather reliable Internet sources and not Blackhawk.

This was not at Blackhawk the last time I visited. I believe it was sold. 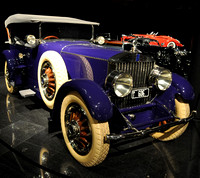