4 photos
This 1920 Elcar H6 Sportster is stock original and the only known Elcar Sportster in existence.

Elkhart, Ind.-based Elkart Carriage Co. manufactured Elcars from 1915-31. It was owned by brothers William and George Pratt, who had been making carriages since the 1880s.

It was not unusual for carriage-makers to try making early automobiles.

The first Elcar was produced in 1915, with two models being produced: a 4-cylinder Lycoming-engine and a six-cylinder Continental.

"There were two models," states the Hillsborough summary, "one powered by a 4-cylinder Lycoming-engine and this type, a Continental R-8 inline 6-cylinder version.

"It is equipped with the deluxe bright work package and 35-inch Disteel wheels."

The Bay Area resident who owns this beauty has one of what is thought to be fewer than 50 Elcars remaining from a 10-year period (1918-1928) of production.

This model was found in a shed in Gallup, N.M., according to the Hillsborough summary.

At one time, it was featured at the Tom Jones Car Museum in Memphis, Tenn.

"It has less than 22,000 miles," the summary notes. "This car was documented by William Locke in his book, 'Elcar and Pratt automobiles, The Complete History.'"

By 1930, the company switched engines and began to use the, at the time, complex Lever engine that was manufactured by Alvah Leigh Powell. However, only four Elcar-Levers were produced.

Elcar then decided to sign what it thought was a lucrative contract with Larry Fay, a businessman and club owner, to provide the would-be El-Fay Taxi.

But with Black Tuesday on Oct. 29, 1929, the future of numerous pre-Depression era car manufacturers changed forever, and that included Elcar with its planned but never delivered El-Fay Taxi. It soon was bankrupt.

Fay was also hit hard as The Great Depression took hold. In 1933, he was shot dead. 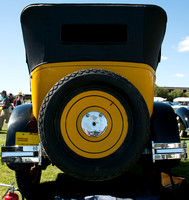