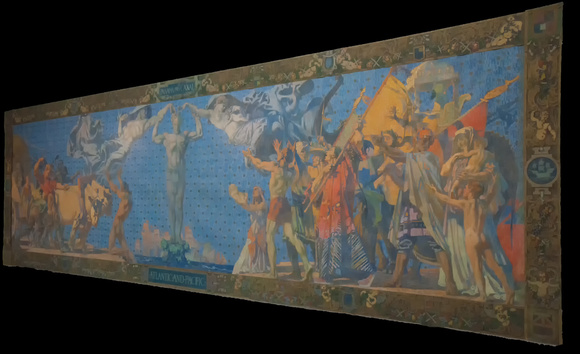 This oil-on-canvas masterpiece was displayed at the de Young Museum when I visited in January 2016. It was painted by William de Leftwich Dodge (1887-1935) and is titled "Atlantic and Pacific" (1914).

"'Atlantic and Pacific" is one of 35 murals commissioned for the Panama-Pacific International Exposition, the 1915 World's Fair, held in San Francisco," according to the de Young Museum. "This artwork was originally installed in the archway beneath the Tower of Jewels, the exposition's architectural centerpiece, as part of a cycle of six canvasses by Dodge.

"After the close of the fair, the tower and the PPIE's other temporary buildings were demolished, but most of the murals were preserved and eventually donated to the future San Francisco War Memorial. Last seen by the public in 1915, this canvas was rolled up and held in storage for the past 100 years.

"Dodge's mural celebrates the 1914 opening of the Panama Canal, which gave ship traffic a shortcut between the Atlantic and Pacific Oceans, alleviating the long and perilous route around South America. This allegorical composition includes processions of Western and Easter nations, at left and right respectively, converging toward a muscular colossus that represents the labor required to produce the canal; the giant reaches up to link an ethereal couple, signifying the marriage of the seas.

"The only intentionally jarring element is a nude figure that strives in vain to impede the oxen cart, which the artist depicted to symbolize the destruction of Native American civilization in the name of progress. Dodge designed the elongated figures to be viewed in perspective from 40 feet below, and he limited his palette to the overall color scheme of the fair."
© Glenn Thomas Franco Simmons' Photography
Powered by ZENFOLIO User Agreement
Cancel
Continue