6 photos
This 1934 Bentley 3 1/2-liter DHC was photographed at the 2013 Hillsborough Concours d’Elegance in the San Francisco Bay Area.

“Bentley’s finances were always shaky and, after The Great Depression caused its bankruptcy, Rolls-Royce acquired the company in 1931,” states the cars owners on a display that accompanied the car.

“Derby Bentleys,” such as this one, were built at Rolls-Royce’s factory in Derby rather than Bentley’s Cricklewood facility in the United Kingdom.

“The design of the chassis number B35BL, a three-position Drophead coupe, was selected by its first owner, the Earl of Feversham,” the summary states.

“The coachbuilder, Thrupp and Maberly, delivered 10 similar bodies at a cost of $10,000 each ~ more than 10 times the cost of a Cadillac at the time.

“The current owner acquired it in 1988 and immediately embarked on a Rolls-Royce Owners’ Club tour from Florida to Canada.”

That wasn’t the only tour.

“On another PROC tour, this Derby was driven across the Mojave Desert to Las Vegas, visiting Death Valley, the Tioga Pass and Yosemite National Park.

For me, seeing this Derby Bentley was like taking a step back in history, to another time, an epoch in the Automotive Age when craftsmanship reached, and even eclipsed, the “fine art” of the era. To me, this Derby Bentley is rolling art. Would I rather have 10 Picasso artworks or one Derby Bentley? The Derby, of course! 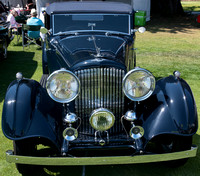