6 photos
Two Shelby 427 Cobras photographed in 2011 at the Capitola Rod & Custom Classics in California. This was among numerous Shelby Cobras displayed by DenBeste Motorsports of Windsor, Calif., which at the time this photo was taken, had an extensive collection of Shelby Cobras.

Although the Denbeste Website was down at the time (September 2016) this post was written, I was able to access the site using the Wayback Machine. The DenBeste Facebook page also hadn't been updated since October 2015.

"Over the years of collecting cars, Bill DenBeste was fortunate enough to become good friends with Carroll Shelby," according to Denbeste's Website. "Bill's passion for cars, and his friendship with Carroll, led him to open DenBeste Motorsports in 2008.

"In the first five years DenBeste Motorsports had grown to become the World's Largest Shelby CSX Cobra dealer. The priority and focus of DenBeste Motorsports is to provide everyone with the opportunity to own a piece of automotive history and be the owner of one of the most sought after collectable cars in the world. 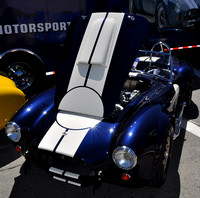