6 photos
This is a one-off 1947 Delahaye Type 135MS, Guilloré Roadster Paris Salon Car. I photographed it at Blackhawk Automotive Museum in Danville, Calif.

"Emily Delahaye founded his automobile manufacturing company in 1895 and continued to design the cars and drive them in competition through 1905," according to Blackhawk.

"Upon Delahaye's death in 1906, Charles Weiffenbach became director of the firm and remained there until it closed in 1954.

"For years the company prospered by manufacturing commercial and fairly mundane passenger cars. By the mid-30s, Weiffenbach ~ some say prompted by Ettore Bugatti's influence ~ decided Delahaye needed an image change."

And, that's what they got.

"The new Delahayes possessed style, speed and individuality," according to Blackhawk. "At the close of World War II, Delahaye was one of the first French firms to resume production."

This magnificent roadster was built by coachbuilder A. Guilloré Carrossier of Courbevoie, France. Blackhawk said it "exemplifies the French coachbuilding style of the 1940s."

"This car was the Paris Salon car," according to Blackhawk. "It placed first in clasas at Pebble Beach in 2001. It's a CCCA national winner, a national AACA winner in 2003 and first in class at Meadow Brook in 2003."

That's just to name a few of the car's distinguished awards.

Delahaye was based in Paris. 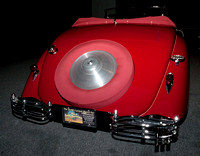