9 photos
This 1926 Daimler Model 45 HP Salon Cabriolet was special-ordered by Gulab Singh, the Maharajah of Rewa of India.

The car followed the grand tradition established by the British Royal Family, which had been a Daimler customer for years.

The car was built by Barker & Co. of London.

"{It} used panels of German silver (a nickel-brass alloy) hand-formed over an intricate wooden frame," according to the Blackhawk Automotive Museum, where this photo was taken in 2012.

"There are two sets of windows ~ one of clear glass, and the other of smoked Triplex.

"With all the glass raised and the top up, the Maharajah's two wives could not be seen as they traveled throughout the kingdom.

"Boa constrictor-shaped horns are mounted on the fenders, and during hunting expeditions servants rode on the rattan seats attached to the running boards.

"In addition to the speedometer, tachometer and oil temperature gauge on the dashboard, another gauge measures air temperature and a gradient meter shows the angle of the huge car on the terrain.

"It was rumored that when the car was discovered in the 1970s, four elephants were used to carry it from the jungle in a giant sling!

I was told that the tongue on the cobras actually moved when the horn is honked. I'm not sure if that is true, so don't quote me. If you know, please send me a note. 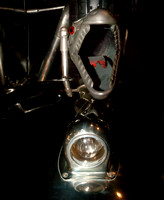