94 photos
(Editor's note: Photos are free to download as a public service to elementary school students who study the missions. If you print the photo, the "Copyright" watermark will not appear. Photos may only be used for noncommercial use. Commercial use would violate my copyright.)

"The mission was named after Saint Bonaventure, a Thirteenth Century Franciscan saint and Doctor of the Church. The mission is located in the historic downtown of its namesake city, Ventura (officially 'San Buenaventura').

"Mission San Buenaventura was planned to be founded in 1770, but the founding was delayed because of the low availability of the military escorts needed to establish the mission. In 1793, the first church burned down. Today, only a small section of the entire mission complex still stands; the cemetery to the left of the church is covered by a school. It took the neophytes 16 years to build the new church, which still functions as a parish church of the Archdiocese of Los Angeles.

"The founding of the San Buenaventura Mission traces to the decision on Palm Sunday, March 30, 1749 by the Franciscan priest Junipero Serra to journey to the New World as a missionary to the native peoples.

"Thirty-three years and one day later he raised the Cross at 'la playa de la canal de Santa Barbara' (the beach of the Santa Barbara Channel) on Easter Morning, March 31, 1782. Assisted by Padre Pedro Benito Cambon, he celebrated a High Mass, preached on the Resurrection, and dedicated a Mission to San Buenaventura (St. Bonaventure). It had been planned as the third in the chain[citation needed] of twenty-one Missions founded by Padre Serra but was destined to be the ninth and last founded during his lifetime, and one of six he personally dedicated.

"...The Mission’s first church building was destroyed by fire. The construction of a second church was abandoned because 'the door gave way.' In 1792 work was in progress on the present church and the small utility buildings which (with the church) formed a quadrangle enclosing a plaza. Although half finished in 1795, the church was not completed until 1809. Dedication was held September 9 of that year and the first liturgical services took place September 10. At about that time the San Miguel Chapel (present corner of Thompson Boulevard and Palm Street) and the Santa Gertrudis Chapel (Highway 33 near Foster Park) were completed.

"A series of earthquakes and an accompanying seismic sea wave in 1812 forced the padres and Indian neophytes to seek temporary shelter a few miles inland. Six years later the padres and their flock had to remove sacred objects from the church and flee into the hills to elude a pirate who was pillaging the Missions but fortunately was headed off after a 'bargaining session' at El Refugio in Santa Barbara.

"The Mexican government in 1834 issued a secularization decree divesting the padres of administrative control over the Missions. In 1845 San Buenaventura Mission was rented to Don Jose Arnaz and Narciso Botello and was later illegally sold to Arnaz.

"And the mission did not fully escape the impact that the Mexican-American War of 1846-1847 had on California. On January 5, 1847, while on its way from Santa Barbara to Los Angeles, the 428 men strong California Battalion, under the command of U.S. Army Major John C. Fremont, managed to disperse an armed force of up to 70 enemy Californios near the mission.

"After California became a state of the Union, Bishop Joseph Sadoc Alemany petitioned the United States Government to return that part of the Mission holdings comprising the church, clergy residence, cemetery, orchard, and vineyard to the Catholic Church. The request was granted in the form of a Proclamation by President Abraham Lincoln on May 23, 1862.

"Because of severe damage in the 1857 Fort Tejon earthquake, the Mission’s tile roof was replaced by a shingle roof. In 1893, Father Cyprian Rubio 'modernized' the interior of the church, painting over the original artwork; when he finished, little of the old church was untouched. The windows were lengthened, the beamed ceiling and tile floor were covered, and the remnants of the quadrangle were razed.

"The west sacristy was removed to provide room for a school, which was not actually built until 1921. During the pastorate of Father Patrick Grogan the roof of the church was once again tiled, the convent and present rectory were built, and a new fountain was placed in the garden.

"In a major restoration under the supervision of Father Aubrey J. O’Reilly in 1956–1957 the windows were reconstructed to their original size, and the ceiling and floor were uncovered. A long-time parishioner commissioned the casting of a bell with an automatic angelus device and donated it to the Mission; it hangs in the belltower above the four ancient hand-operated bells.

"...The entire roof of the church was removed and replaced in 1976. In December of that year the church was solemnly consecrated by Timothy Cardinal Manning. In 1982 the Mission marked its bicentennial anniversary. A new three story school building, with pre-kindergarten, kindergarten, and grades 1-8 located at the base of the hill behind the Mission was dedicated in January 2001. The school also houses the Serra Chapel for Eucharistic Adoration, adult classrooms, a parish/school kitchen, and a large assembly hall used as a school auditorium and for large parish gatherings and one Sunday Mass. The assembly room was named after Monsignor Patrick O'Brien who was the pastor of the church for 25 years until his sudden death in 2005. The Mission celebrated its 225th Anniversary with a year-long series of events and activities during 2006–07.

"Today all that remains of the original Mission is the church and its garden. A small museum sits at the Mission with displays of Chumash Indian artifacts and mission-era items. Located in the historic downtown of Ventura, very few California missions had the center of business and commerce remain at the location where the mission was established like Mission San Buenaventura. The Church remains an active Catholic Parish serving approximately 2000 families and services are still held in the parish church. The current Pastor is Father Tom Elewaut, who has served since 2011." 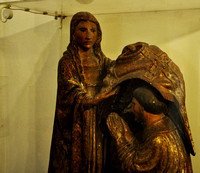 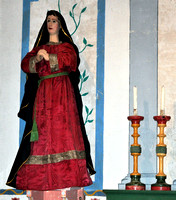