8 photos
This 1937 Cadillac 60 Series Convertible continues to impress all who are fortunate enough to drive one of these iconic beauties.

Power is not lacking, performance is flawless and the quality of workmanship approaches an artistic, as well as a mechanical, masterpiece.

Shown at the 2012 Hillsborough Concours d'Elegance, this 1937 Cadillac 60 Series V-8 Convertible was then (and may still be) owned by a San Francisco resident, who was extremely nice and provided a lot of information.

Next time, I am digging up one of my old Reporter's Notebooks and bringing it with me to take proper notes because he was so informative.

A 1937 Cadillac-Fleetwood promotional poster said that its V-8, V-12 and V-16 models were "from the royal family of motordom."

"There is no better proof of merit than public approval," it said. "It is tremendously important, therefore, that more people buy Cadillac-Fleetwoods than any other car of comparable cost.

"There are three major reasons why this car is true: No other car is so beautiful as Cadillac-Fleetwood, no other car performs so brilliantly, and none carries the hallmark of prestige.
"Now available in 13 bodies by Fleetwood. Individual custom designs upon request."

In reading about Cadillac, I found an article that stated owners could have a choice of hood ornament: the flying goddess or a heron.

Prices ranged from about $2,600 on up, if you purchased a car in Detroit, Mich. If not, transportation and state and local taxes would be added to the vehicle's cost.

Cadillac called the 1937 Cadillac 50 series an "aerodynamic" car that included all the "standard accessories" anyone would need.

Cadillac manager Nicholas Dreystadt came up with the iconic Series 60, which debuted in 1936 and fulfilled a Cadillac goal: offering a mid-priced car between the LaSalles and the expensive Series 70 Cadillacs.

In 1939, it was replaced by the Series 61; however, its creation spawned a decades'-long flirtation by Cadillac with the spin-off 60 Series that Cadillac would re-invent on occasion through 1993.

Production of the 60 Series was short-lived, with models manufactured from 1936 to 1938.

The 120-inch-long wheelbase seems massive when you actually get close to one of these beauties. They are large, indeed! Very impressive.

Cadillac was so happy with its creation, another sales promotional poster said: "These are easily the most magnificent cars ever conceived."

Another said: "Never before have motor cars been carried to such heights of excellence, yet Cadillac-Fleetwood prices are surprisingly moderate."

Yet another Cadillac promotional poster summarizes what any owner of one of these beauties will tell you: "Those who desire the utmost in mechanical excellence and distinction will find these qualities carried to new heights."

A Hillsborough informational summary stated: "The cars ... share the basic 'B body' with LaSalle, Buick and Oldsmobile. The body, designed by Harley Earl, made use of Fisher Body's new 'turret top' ~ a one-piece roof construction and offers a tall, slender grille and a split-V windshield.

"The car is powered by Cadillac's 346ci (5.7 liter) monobloc V-8 engine developing 125hp."
The summary noted the 60 Series 60 was Cadillac's best-selling model in the period it was manufactured.

With a monobloc almost as powerful as the V-12 (135hp), the V-8 was much less expensive to manufacture, making it a better buy for those interested in balancing cost, performance and value.

The car at Hillsborough also has historical significance outside standard automotive history: "This car was in the Golden Gate Bridge's 50th anniversary celebration," the summary noted."

While all photos are free to download for personal noncommercial use, your support of my business is appreciated. Car show and car museum photos are not available as commercial products. Please read terms before downloading. 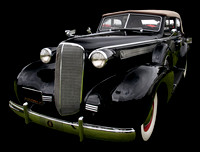