4 photos
Travelers might notice the well-cared-for white building with blue trim in Silver City, Nev., without realizing it is part of a living history that dates all the way back to the origins of The Comstock Lode.

"Lodge membership increased to 36 Master Masons, 4 Fellow Craft, and 12 Entered Apprentices in 1865, when the Lodge severed it connection to the Grand Lodge of California, and united with other Lodges in the organization of the Grand Lodge of Nevada, from which it received a charter at the time as Amity Lodge No. 4 on January 16, 1865. Its first Master, Brother John C. Currie, withdrew, and united with Virginia City Lodge at Virginia City, and was elected Grand Master of Masons of the State of Nevada, and also served as Mayor of Virginia City. Brother Richard T. Mullard was the last Master under California jurisdiction, and Master under newly formed Amity Lodge No. 4, he would later become Deputy Grand Master." 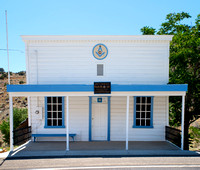