13 photos
This 1937 Airomobile was photographed at the 2011 Hillsborough Concours d’Elegance and at the National Car Museum in Reno, Nev.

This car was donated to the museum by Harrah’s Hotels & Casinos.

It was an experimental sedan built by Lewis American Airways Inc. of Rochester, N.Y. Its projected retail price would have been $550. It has a Doman-Marks air-cooled OHV engine.

"The National Car Museum said the 4-cylinder, 60-hp engine was “horizontally opposed. Here are the engine’s other measurements: 3-7/16-inch bore, 3.5-inch stroke and a displacement of 129 cubic inches.

“Paul Lewis of Denver, Colo., conceived the idea for this futuristic automobile in the early 1930s and, in 1936, contracted with Doman and Marks to build a prototype.

"Working from an aerodynamically styled model created by John Tjaarda, designer of the Lincoln-Zephyr, construction began on the unusual three-wheeled front-wheel-drive Airomobile.

“It was pronounced road-ready in April 1937. The Airomobile prototype displayed {in these photos} was driven more than 45,000 miles throughout the United States in a promotional effort to raise production capital.

“While the Airomobile proved itself a technical success by performing creditably at speeds of up to 80 mph and averaging 43.6 mpg of fuel, financial backing was not forthcoming. Although intended as a low-cost mass-produced people’s car, this was the only Airomobile built.” 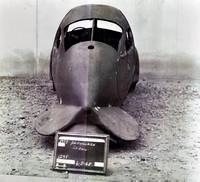 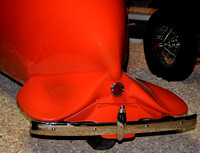 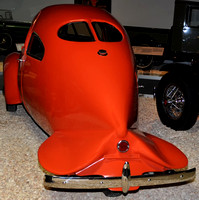