2 photos
"Herbie the Love Bug is a sentient anthropomorphic 1963 Volkswagen Beetle, a character that is featured in several Walt Disney motion pictures starting with the 1968 feature film 'The Love Bug'," according to Wikipedia.

"He has a mind of his own and is capable of driving himself, and is also a serious contender in auto racing competitions. Throughout most of the franchise, Herbie is distinguished by red, white and blue racing stripes from front to back bumper, a racing-style number '53' on the front luggage compartment lid, doors, and engine lid, and a yellow-on-black '63 California license plate with the lettering 'OFP 857'."

This Volkswagen, painted and numbered like the original movie car, was parked at the Big Sur Inn on the California Coast in 2010 when I photographed it. 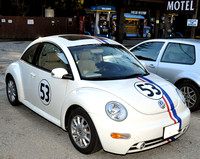