"This particular vehicle was original raced on dirt and board tracks before being retired in the late 1950s," states the owner summary at the 2010 Palo Alto Concours d'Elegance. "A restoration was completed in 1986 by the current owner.

"Running Messerschmitts are extremely rare. Yes, the vehicle is street legal, and does not require a helmet in California. It has pedals just like a car and a shifter on the right. The steering is extremely responsive. The driver sits in the center of the weight balance and the vehicle handles extremely well and predictable."

Originally powered by an 8hp Sachs 2-stroke motor, this Messerschmitt's top speed was approximately 63 mph. Three people, with one passenger being small, could fit into this bubble car.

"The Messerschmitt bubble car was designed by Fritz Fend in 1952 as a way for post-WW2 Germans to get around inexpensively in an enclosed vehicle," the summary notes. "The idle Messerschmitt factory built the KR 200 series from 1955-1956, and then FMR built them under license from 1956-1964, when demand for an inexpensive vehicle had ended.

"Very few vehicles were manufactured in 1963 and 1964. Approximately 40,000 Kabinenrollers were built under the three basic series: KR 175, KR 200 and the very rare and valuable FMR Tg500. The KR 200 series was built in two basic versions: a model with a large Plexiglas bubble and sliding side windows, and an open roadster similar to this car.

"The Messerschmitt has seen rapid value increase since the early 1990s with the expansion of the collector car market. Restored vehicles were even displayed in a special bubble car class in 1996 at the Pebble Beach Concours de'Elegance!

"Parts can be sourced from various suppliers in England and Germany, where most of the vehicles were originally sold." 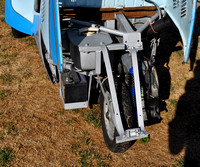