4 photos
This 1929 Packard is a 640 Touring model and it was one of the most-popular of its type during the early 20th century.

“Usually equipped with a convertible top, side curtains could be installed to protect passengers from wind and weather,” writes the Bay Area owner who displayed the car at a Hillsborough Concours d’Elegance. “Otherwise, they braved the elements.”

“The custom eight (640) straight-8 engine displaces 385ci, developing 106hp @3200rpm mated to a 3-speed transmission with a two-plate clutch,” the owner from the North Bay writes.

“When Warner Brothers used a Packard 640 in an early ‘talky,’” the owner adds, “it had to dub the sound of an engine since the car was too quiet for Vitaphone to pick up!

“The current owner acquired this vehicle from John Amneus in 1988 and used {it} in many Candy Store tours.

“In 1950, Packard borrowed the car to use in a Packard anniversary parade and display in Detroit.”

So, it’s a very special car. An icon of a grand era of automaking that has passed.

“It recently underwent a body-off restoration to all original parts and upholstery design to factory design,” he notes.

That makes it even more special, especially for me since Packards through World War II are among my favorite cars. 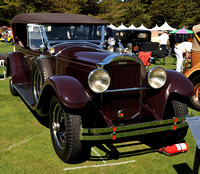 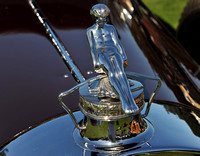