10 photos
The genesis of Cadillac's more than 100 years of existence started with a small single-cylinder engine designed by Henry Leland.

Although many drivers throughout the world may not know the name of Henry Leland, they owe much to his revolutionary design of that engine.

As early as the 1870s, Leland was already working in the infancy of an industry that would revolutionize the world.

As the founder, vice-president and general manager in the machine shop Leland & Faulconer Manufacturing, he played a key part in supplying those single-cylinder engines to Ransom E. Olds' Olds Motor Vehicle Co.

You know, the American company that became Oldsmobile and is now wholly owned by Italian automaker Fiat. Olds Motor Vehicle Co. used them in its two-seater horseless carriages, as automobiles were called at the time.

It was in August 1902 that Leland & Faulconer Manufacturing became Cadillac and began producing runabouts they named "Cadillac."

The name of Cadillac was derived from Antoine Laumet de La Mothe, sieur de Cadillac. He was a French explorer in “New France,” a vast area North America that stretched from present-day Eastern Canada to Louisiana.

In 1701, the adventurer is credited with founding Fort Pontchartrain du Détroit, from which the modern metropolis of Detroit developed. The explorer commanded the fort until 1710.
The first Cadillac, the Model A, was officially completed on Oct. 17, 1902.

“The following January Cadillac attended the New York Automobile Show where orders were taken for nearly 2,300 cars in less than a week,” Blackhawk noted. “The company declared they were sold out for the production year!

It was 1906 that would top its earlier sales years, with the 1906 Cadillac Model M Tulip Tourer as that year's most-popular model. (Prior to 1906, Cadillac had produced Models A, B, C, E and F.)

The 1906 Model M's coachwork shape is why it was named the Tulip Tourer. These horseless carriages shared a single-cylinder 98.2-inch engine rated from 6.5 to around 9 hp depending on model.

"The cylinder was horizontal, pointing rearward, and was cast from iron with a copper water jacket," Wikipedia noted.

Bore and stroke were square at 5 inches. Cadillac employed the letter system until 1908. These single-cylinder Cadillacs share many parts in common. Models E, F, K, M, S and T are basically the same vehicle with different bodies.

“1906 was Cadillac's biggest year for the sales of single-cylinder cars to date,” Blackhawk said. “The company boasted that there were nearly 14,000 single-cylinder Cadillacs in use throughout the world.

“That year was also a milestone for Cadillac's corporate identity as the flowing Cadillac script first appeared on the radiators of the automobiles.”

“But, the Leland-built single- cylinder engine produced more,” Blackhawk stated. “It was Cadillac's policy to deliberately underrate the engine output.”

Leland's creative genius was not limited to automobiles. He also invented electric barber clippers and the Leland-Detroit Monorail toy train. Leland left Cadillac in 1917 and embarked upon building the Lincoln Motor Co.

While all photos are free to download for personal noncommercial use, your support of my business is appreciated. Car show and car museum photos are not available as commercial products. Please read terms before downloading. 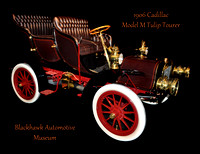 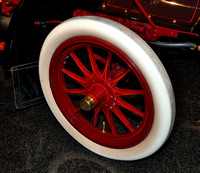 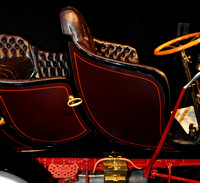 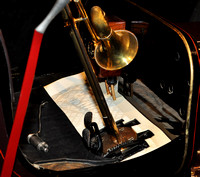