When Golden Gate Backroads photographed it at the 2010 Palo Alto Concours d'Elegance at Stanford University, it was one of the more popular vehicles featured.

The concours, which celebrated its 44th year in 2010, is hosted by the Palo Alto Host Lions Club since 1967.

Next year’s event will be its 48th but it is now held at the San Mateo County Events Center, rather than at Stanford University.

Classic, vintage and/or interesting vehicles are part of what makes the concours a wonderful event for families. A lot of automotive history is on display at each concours. Some of the vehicles are works of art and craftsmanship.

The 1905 San Jose fire chief buggy is just one illustration of that history.

With almost all of the vehicles featured, there is some information that is posted by the vehicle that explains its history. If not, owners are often eager to share the love of their cars, not to mention their vehicles’ histories, with passers-by.

As such, the buggy is an integral part of San Jose's lengthy history, which includes its fire department.

"San Jose has a rich and colorful history spanning more than 225 years," states the department's Web site, "from its founding as the Pueblo de San Jose de Guadalupe in 1777 to the present day high-tech metro city it has become."

San Jose became a city on March 27, 1850, when it received its charter. It was a milestone in California's history because San Jose also featured the first capitol because it was the state's first capital.

It didn't take long for the city's elected officials to understand the importance of fire protection.

"On July 11, 1850, the Common Council passed Ordinance 80 which established 'fire limits' within the city," the Web site notes, "restricting the use of vegetation and canvas for building purposes.

"{It} provided for the appointment of four men to inspect fireplaces and stovepipes."

In a little more than three months, on Oct. 24, 1850, a fire flared into an inferno and burned for two days in the new city.

Less than a month later, the council saw the wisdom in creating its first fire company: Eureka Fire Co. 1.

It also launched an effort that would lead to the construction of a fire house.

As the automotive age dawned, the 1,100-pound Cadillac was featured. It’s no more than a contemporary low-powered go-cart or lawn mower. The two-speed’s 9 hp. engine cost of $950 new. 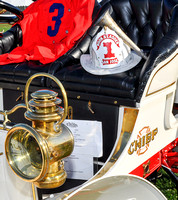